Rings Of Power: How Galadriel Compares From The Books To The Premiere

The Lord of the Rings author, J.R.R. Tolkien, wrote Galadriel as an important figure through all three Ages of Middle-earth, so it was no surprise that she carries a lead role in the Prime Video series, The Rings of Power. As one of the most powerful of the Elves and one of Sauron's most bothersome threats, a story about the Second Age would have been desperately lacking without her.

Of course, with changes in the timeline and several key aspects of Tolkien's works, it's no surprise that the version of Galadriel that audiences see in the new series is vastly different from the being they read about. Regardless, Galadriel's foundation remains concrete. From her motivation to fight Sauron to the reason she came to Middle-earth, to begin with, there are several critical aspects of Galadriel's character to compare between Tolkien canon and the new series.

At the beginning of the Rings of Power premiere episode, Galadriel explains what her life was like in Valinor, also known as the Undying Lands. This realm was paradise, and the immortal beings there lived in harmony with the god-like Valar. They didn't even understand the concept of death.

While this is a simplified version of the time before Morgoth's destruction in Valinor, it aligns reasonably well with Tolkien canon. The Silmarillion goes into much more detail about the briefly mentioned events of Morgoth striking the Two Trees of Valinor and, of course, the creation of the Silmarils. However, when it comes to Galadriel's childhood, the series is believable.

In Tolkien canon, Galadriel has four older brothers. However, the only relationship explored in the books was with the eldest, Finrod. Galadriel was described to have adored her brother and was devastated over his death at the hands of Sauron's werewolf.

While Finrod is a canon character in Rings of Power, his story greatly differs from book to series. In fact, after his death, Finrod was brought back to life and sent back to Valinor. However, the personal relationship depicted in the series is entirely believable.

In The Rings of Power, Galadriel is full of rage over the wickedness of Morgoth and Sauron during the First Age. While she has not yet described her role in the early wars, her eagerness to defend against evil at all costs demonstrates her secure loathing of those that turned toward evil.

However, The Silmarillion and Tolkien's Unfinished Tales describe how Galadriel did not take part in the wars during the First Age and that she did not believe it was in her or her people's power to stop Morgoth. The Dark Lord had been a Valar, one of the most powerful supernatural beings in Lord of the Rings, so she felt only the Valar could stop him (ultimately, she was right.)

In Rings of Power, Galadriel describes how the Elves of Valinor had set sail to Middle-earth to fight against the Dark Lord Morgoth. However, The Silmarillion tells a much more complicated tale. Galadriel was part of a group of Elves called the Ñoldor, who left Valinor for Middle-earth against the will of the Valar, not to save it from Morgoth, but instead to reclaim the precious Silmarils.

Galadriel herself had no interest in the Silmarils. Instead, she went along with the rebellion because she had longed to travel to Middle-earth and establish her own rule there. This differs significantly from the Prime series and is a considerably less sympathetic portrayal of her character.

In The Rings of Power, Galadriel is given the opportunity to return to Valinor to live out her days in peace. However, knowing that Sauron was still waiting in Middle-earth, she threw herself from the boat to find him.

This was not the case in the books. After the rebellion of the Ñoldor, Galadriel's people were banned from returning to Valinor. After Morgoth's defeat, the Valar pardoned them, but Galadriel chose to stay behind and establish her rule.

A common argument amongst Lord of the Rings fans since Rings of Power began streaming is whether Galadriel's character should be portrayed as such a strong warrior. Tolkien's works described the elf as amongst the most powerful of their kind, but this power is demonstrated in a very different way.

In the books, Galadriel has magical abilities that allow her to see into the hearts and minds of people, even if they are far away. However, the series has so far not shown this. It is possible that this will be demonstrated after she receives her Ring of Power, but so far, she seems to have strength more akin to warrior elves like Legolas. 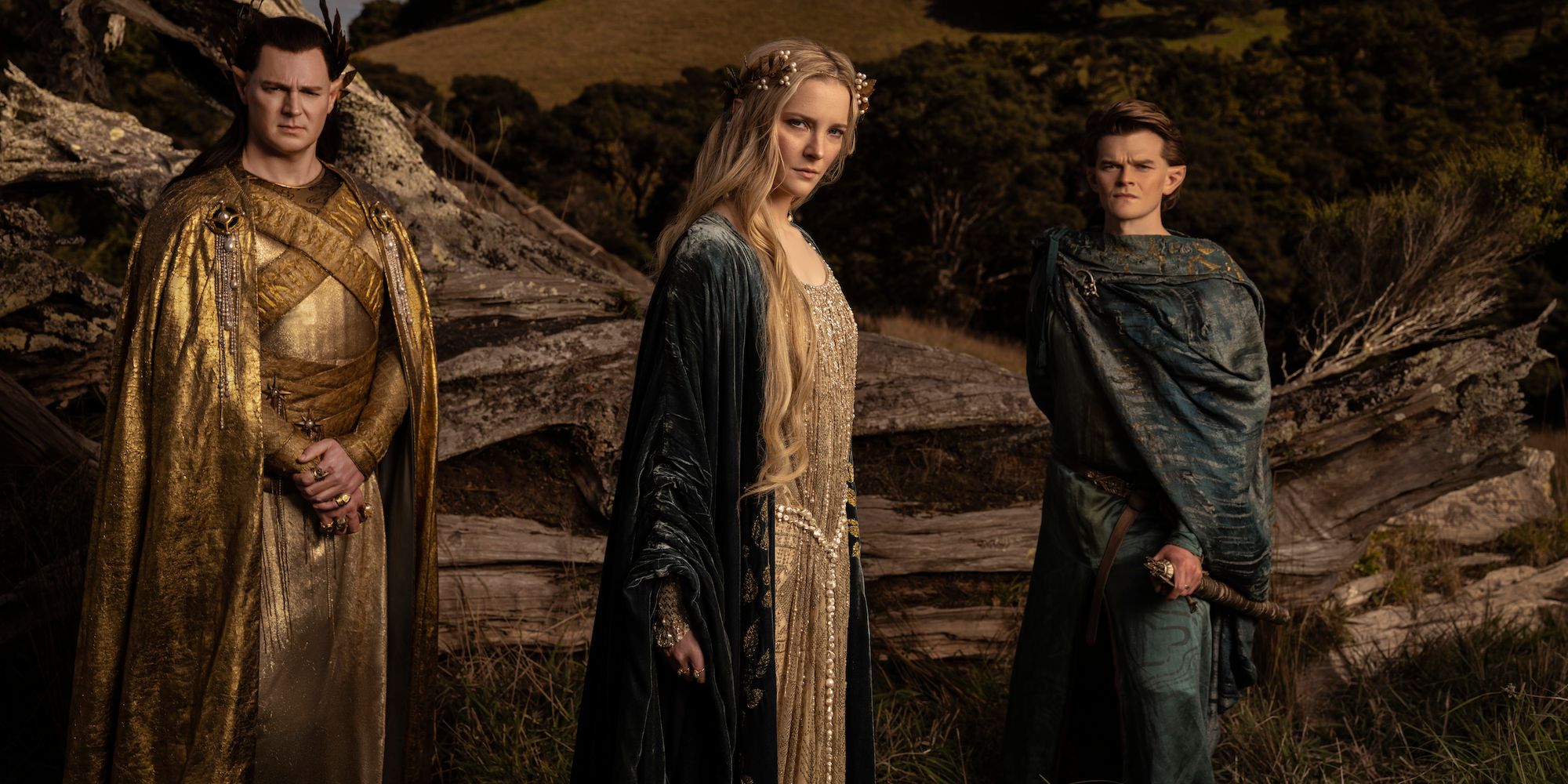 In Rings of Power, Galadriel is treated by Gil-galad as a disobedient child. He seems to have respect for her, but her status in comparison to his is very low. Even other elves only introduced her as Elrond's friend and didn't seem to know who she was.

This is different from canon, where Galadriel was regarded with more respect than even Gil-galad himself. Every member of the Elven race would have known who she was, and while she had respect for Gil-galad, he would not have had the authority to send her to Valinor.

With vengeance as her primary motivator, romance and marriage seem very far from Galadriel's mind in Rings of Power. Still, she had Elrond seem to have a certain spark, and teaser trailers for The Rings of Power revealed a flirtatiousness between her and the human Halbrand.

However, in Tolkien's books, Galadriel entered into the Second Age already married to Celeborn, and by the time shown in the early episodes of the Prime series, she would have already given birth to her daughter, Celebrian.

As two important leaders amongst the Elves, there is no question that Elrond and Galadriel had a close relationship in The Lord of the Rings and other Tolkien works. However, none of these ever demonstrated the level of familiarity that the two showed in Rings of Power.

Instead, Elrond is written to have married Galadriel's daughter, Celebrian, sometime during the Second Age. While it's possible that the two had the kind of close, almost flirtatious connection they do in the series, it seems more out of place compared to the mother-in-law and son-in-law relationship seen in canon.

1 Galadriel's Connection To The Race Of Men

An intriguing relationship that begins in Rings of Power is that of Galadriel and Halbrand, who is an original character to the series. They are being presented as an unlikely yet fated meeting, which is likely to significantly influence the relationship between the two races in future episodes.

However, Galadriel never had any significant interactions with the Race of Men, other than the Rohirrim early in the Third Age and, later, Aragorn. Therefore, there is little in canon to help predict where these two characters will end up, leaving audiences with several burning questions after the first few Rings of Power episodes.

NEXT: 20 Wicked Things Sauron Did Between The Hobbit And The Lord Of The Rings